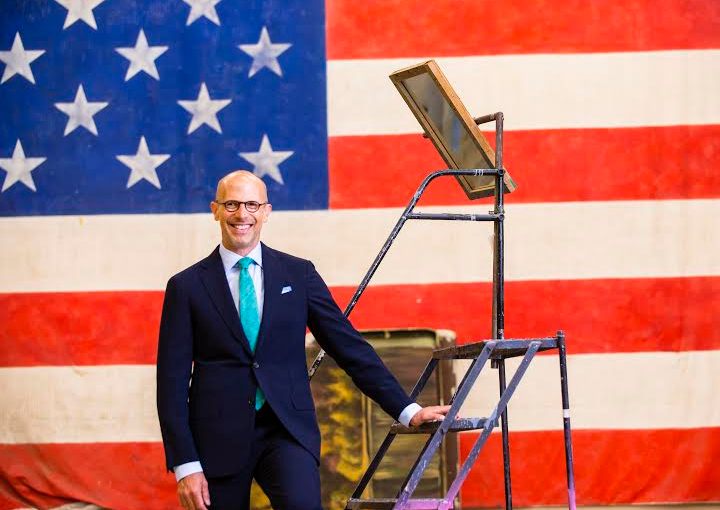 In addition to celebrating Winston-Salem natives that have moved on to do significant things outside of Winston, this blog will also celebrate local people who make a difference currently in Winston-Salem.

Lindsay Bierman became the eighth Chancellor of the North Carolina School of the Arts two years ago in the spring of 2014. Leading the nation’s first state supported art conservatory, Bierman presides over nearly 450 faculty and more than 1,200 gifted students in the institution’s high school, undergraduate, graduate, and summer programs.

Bierman came to Winston-Salem after over two decades in the high-profile media and design worlds. His most recent position was as Editor in Chief of the very popular Southern Living magazine, which is based in Birmingham, Alabama. During his time at Southern Living, the publication saw a top-to-bottom rebuilding process, brought in more than 18 million consumers per month, and won numerous industry awards.

He began his career in New York City as a writer, designer, and researcher for world famous architect, Robert A.M. Stern. Bierman grew up in Michigan, and attended undergraduate school at Georgetown, where he studied French and history. In 1993, he received his master’s degree in architecture from the University of Virginia.

Over the last two years, Bierman has loved his time at UNCSA and in Winston-Salem. He lives very close to campus, and is also rebuilding a house on Lake Norman. Read about Chancellor Bierman’s favorite things about Winston below:

What are some unique things that School of the Arts offers that you can’t find at other institutions?
We have five top-ranked conservatories on one compact campus, plus a high school, and offer intensive and unparalleled collaboration across artistic disciplines. At the college level, we provide professional training analogous to medical or law school as opposed to a traditional undergraduate curriculum. The majority of our faculty and deans transitioned to higher ed directly from their profession, and serve as mentors to each student. Many conservatories promote a culture that’s highly competitive and cutthroat; at UNCSA you see high school, undergraduate, and graduate students happily share the spotlight and enthusiastically support each other. Every day, I marvel at the rare discipline and maturity of these young artists—by the time they audition or submit their portfolio to get in, they have clear priorities and defined life goals, so they’re remarkably driven toward achieving the benchmarks they’ve set for themselves.

What were a couple of the biggest changes in your transition from the design and media worlds to higher education?
I’ve dealt with corporate politics, budget reductions, and organizational challenges for most of my career—but nothing compared to the vast bureaucracy, funding shortfalls, and partisan debates I’m seeing now. Fortunately, I’m unfazed and undeterred by churn and disruption. I’ve been leading through change and uncertainty for more than a decade; it’s the new normal.

You have lived all over the United States. What are some things that are unique to Winston-Salem that you have really enjoyed?

I strongly prefer living in a big small town than anywhere else. I love the scale of Winston-Salem, the Southern charm, and the unusually tight-knit creative and business communities here. I especially admire and passionately support the network of organic local farmers in the Triad—they are some of the best anywhere.

Since you have your Masters in Architecture, what is your favorite building in Winston-Salem?
I studied in the shadow of Jefferson’s lawn at UVA, so I’d have to say all of Old Salem!

What are some of the biggest differences of living in the South from growing up in Detroit?
Everything—food, music, culture—and especially the native temperament. I can characterize it this way: when I lived in France during college, I remember traveling South to Italy on the train. As we rolled out of Paris, the French passengers remained quietly seated, while a group of Italian passengers exclaimed “Partiamo! Partiamo!” and jumped up to blow kisses out the window. That’s the biggest difference between North and South, both in Europe and America.

You are big into working out. Where is your favorite place in Winston to work out?
I train at Top Tier CrossFit, on Liberty Street. My frequent and intensive training, especially now that I’ve hit the big 5-0, is as important as the source and quality of the food I eat every day, and one of the non-negotiables in my weekly schedule.

What neighborhood in Winston-Salem do you live in? What are some of your favorite things about your neighborhood?
I live near the Brookstown Inn. It’s an area in transition, ideally located between UNCSA’s campus, Old Salem, and downtown. We have one of city’s best coffee shops across the street, Twin City Hive, and Cobblestone Farmers Market—one of the very best in the state—a short walk away.

Can you tell me a little bit about the house you are working on in Lake Norman?
It’s a 1960s ranch with wide-open breathtaking views up and down the main channel. I’ve renovated a lot of houses, but this one turned out to be much more difficult than I ever imagined—somehow our inspector missed all the rot, water damage, termites, shoddy repairs, and dangerous wiring. Most buyers in this market would have torn it down for the lot, but we chose to embrace its quirks and enhance the mid-century, rustic-meets-modern lake house vibe.

If you were on a stranded island and could just have one breakfast for the rest of your life, which Winston-Salem delight would you choose: Moravian sugar cake, Bojangles biscuits, or Krispy Kreme doughnuts?
I’ve followed a fairly strict Paleo diet for many years now, so I can’t remember the last time I had flour or sugar, or even craved it. There’s nothing more delicious or indulgent in the world to me than ripe fruit picked right off the tree.

What are your top three Winston-Salem restaurants?
Vin205 Bistro and Wine bar—chef Alex sources only the highest quality pasture-raised meat and poultry and mostly organic produce; Diamondback Grill, for Paleo zucchini noodles or the grass-fed Paleo burger; and The Katharine Brasserie, the kind of restaurant I’ve been waiting for since the day I moved here, a kind of scaled-down Southern version of Balthazar in New York.

Would you two rather go to Hanes Mall or to Thruway?
I make occasional runs to Williams Sonoma or Pottery Barn at Hanes Mall, but I more regularly frequent the Thruway. I love Southern Home & Kitchen, C Distinctive Eyewear, and have had my cell phone screen replaced at least six times at the CPR (stands for cell phone repair) shop there.

What is your favorite place in the mountains of North Carolina?
Highlands. I visited often when I lived in Alabama. I wish it was closer.

What is your favorite North Carolina beach?
It’s all so beautiful! We visited Duck a few weeks ago, and a friend in Morehead City last summer, but I haven’t been to enough towns yet to pick a favorite. Still, I’m guessing it would have to be somewhere on the Outer Banks.

Where is your favorite day trip outside of Winston?
My home on Lake Norman. It’s an hour door-to-door, and it’s my anchor. I’m an only child, so in contrast to lots of committee and board meetings, remarks at the podium, and large social gatherings, I need long periods of time alone and in nature to work effectively and think clearly.

Is there anywhere in North Carolina you really hope to visit soon that you haven’t been to yet?
Incredibly, I’ve yet to make it to Durham! At Southern Living, we named it the “Tastiest Town in the South” by popular vote, due to the vibrant food scene there. I’ve known Sara Foster, a native local chef and great cookbook author, forever. And of course I need to get to DPAC!