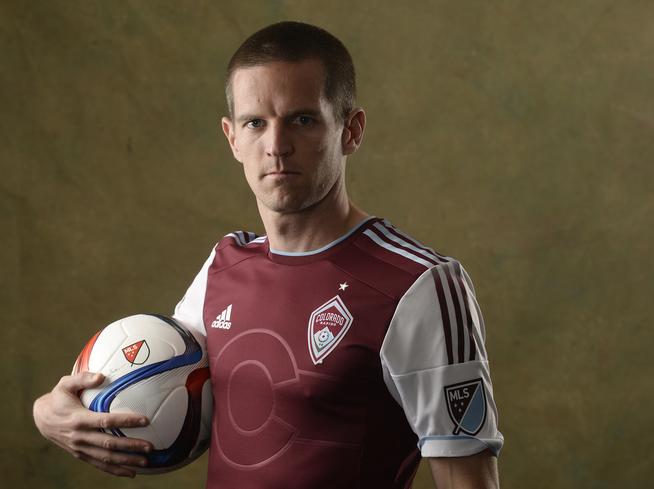 I talked to Sam Cronin while he was snowed-in during a 15 inch snowstorm in Denver, Colorado. Cronin joined the Colorado Rapids in January of 2015 and is currently in his eighth year as a professional soccer player in Major League Soccer. He has been a winner at every level, including bringing two championships to Winston-Salem, and he is hoping that this is the year that he picks up his first MLS Cup.

“I love Winston,” said Cronin. “Winston molded me into the person I am now.”

Cronin is the fourth of five children in what has to be one of the most athletic families to come out of Winston-Salem. His oldest brother, McNeil, played soccer at Furman. Next in line, Colin, was a runner at N.C. State, and then Hugh went on to play soccer as a Wolfpack. Cronin was fourth in line, followed by the only daughter of the family, Grace, who was also a soccer player.

The Cronin’s moved to Winston-Salem when Sam was thirteen from Atlanta, when his dad was re-located with Wachovia. “It was the best move for all of us,” said Cronin. He started school at Jefferson Middle School for two years and went on to Mt. Tabor. Along with the help of Hugh, the Cronin brothers helped bring Mt. Tabor their first ever state soccer title his sophomore year (McNeil just missed out his senior year in the championship game).

While he was in eleventh grade, Cronin started dating his future wife, Samantha, who was also a Mt. Tabor soccer player. Along with his success at Mt. Tabor, Cronin also played travel soccer with the Twin City Youth Soccer Association for five years, and in Greensboro for two years. His talent caught the attention of N.C. State, Duke, and Wake Forest. He decided to stay home and play for the Demon Deacons.

He has always been a proven leader and has been a captain at every level, including this past year with the Colorado Rapids. Cronin was selected as a captain for Wake Forest both his junior and senior seasons. After helping to lead the Demon Deacons to three NCAA Final Fours, he was a major reason Wake Forest brought home their first national title during his junior season.  Cronin’s play his senior year helped him finish in the top three for the MAC Hermann Trophy for the NCAA national player of the year.

After graduating from Wake (Political Science), Cronin was selected second overall for Toronto F.C. in the 2008 MLS Draft. He played for Toronto for two seasons. In 2009, he was called up to the United States National Team and he earned two caps in the Gold Cup against Haiti and Mexico. In 2010, he was signed by the San Jose Earthquakes, where he played until 2015 when he joined Colorado.

(Another fantastic finish for San Jose)

This year, Cronin earned his 200th cap as a major league soccer player. The Rapids recently signed two of the most well-known American soccer players and heroes from the Brazil World Cup in 2014, Jermaine Jones and Tim Howard. “Those are two guys that have storied careers,” said Cronin. “I think we have a good team, and the talent in place to make the playoffs. We just have to do it on the field.”

Cronin dated Samantha throughout college, while she was away at Tulane in New Orleans. They were married in 2011, and a year and a half ago, they had their first son, Levi. Samantha is pregnant with their second son, who is due in late June. Cronin said, “we have loved everywhere we have been, but Winston is definitely home for us.”

What neighborhoods in Winston did you live in?
I lived off of Shattalon Road in Summerfield. My wife grew up in New Sherwood.

Who were some of your favorite teachers at Mt. Tabor?
Mr. Giles was great. Keith Donnelly had a big impact on my soccer career. I loved Coach Sapp. I had him for weightlifting and I kicked one year on the football team at Tabor. He did a good job of turning boys into men.

You played football? What was your longest field goal?
I just kicked my senior year, and it was during soccer season. I really couldn’t ever practice with the football team. I made a lot of extra points, but I only attempted one field goal, from fifty yards. It was blocked. I got bet by players and the coaching that I couldn’t make a left footed extra point though, and I made that one.

Where all did you have jobs?
I always worked camps at Wake. I did some individual coaching around town. I still haven’t had a real job at twenty-nine.

What do you want to do when you are done playing?
In recent years, I have been exploring a career in real estate. I could see myself having a career in a MLS front office.

If you ever move back to Winston, where could you see yourself living?
I would love to be close to downtown with all the great things happening there. Ardmore has cool characteristics. Buena Vista is great too.

What are your top three favorite Winston-Salem restaurants?
In high school, it was Teddy G’s without a question. I love The Filling Station. I would also say The Village Tavern in Reynolda Village.

Were you more of a Hanes Mall or Thruway fan?
Thruway, definitely!

If you were on a stranded island and could just have one breakfast for the rest of your life, which would you choose: Moravian sugar cake, a Bojangles biscuit, or Krispy Kreme doughnuts?
Bojangles biscuits. I could mow those down all day.

What is your favorite North Carolina Beach?
Ocean Isle Beach. I have been there with friends and with my family a couple times. With all the sports we played, it was hard for my family to travel.

Did you have a favorite concert at Ziggy’s?
Corey Smith. He put on a great show there.

What was your favorite ACC Team growing up? Did you have any favorite player there?
Wake Forest! I loved Josh Howard. He was the ACC Player of the Year. I have fond memories of him playing at Wake.